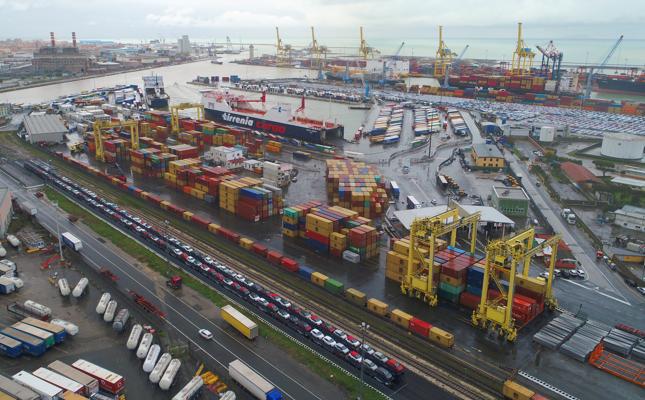 Livorno – The new railway link between Trmava (Slovakia) and Livorno for the transport of finished vehicles of the Psa group (Peugeot, Citroen and Opel) has been operating this morning. The service, which from now on will be carried out with a frequency of three times a week, will bring a dowry to Livorno, and in particular to the Terminal Sintermar, about 2,800 cars a month. This is an absolute novelty for the port of Livorno, which did not see a new car train passing since 2004, for almost fifteen years.

The first train of the service arrived this morning at the Railway station Porto Nuovo (Sponda Est Darsena Toscana area) and landed about 240 cars, which were then sorted by Sintermar for shipping by sea to the national markets (Sicily, Sardinia) both towards international ones (in particular Spain, with Valencia and Barcelona). Furthermore, a percentage of the cars will be sent by land to the dealerships of the Peninsula through the Livorno Vespucci interport. The new link will soon be joined by another for the import of new cars to Austria.

Overall, Sintermar aims to move over 25 thousand new cars a year by train, thus reducing the share of road transport to and from the port. This is another good news that is added to that of the growth of container traffic on rails, appeared in recent days. In short, Livorno aims to apply increasingly as a major railway hub on the international scene: “We are satisfied – says the general manager of the terminal Sintermar, Federico Baudone-. Having a new car traffic on the train is an important result and is the result of a great synergy with the Port Authority , which was able to respond in a timely manner to the needs of the operator, allowing a more efficient use of existing railway infrastructure and developing intermodality ».

All of this is part of the broader scenario of the so called “Iron Plan” which includes, among other things, the optimization of the Porto Nuovo railway link, between Via Leonardo Da Vinci and Via Luigi Galvani, within the Commercial Port, near the Galvani passage.