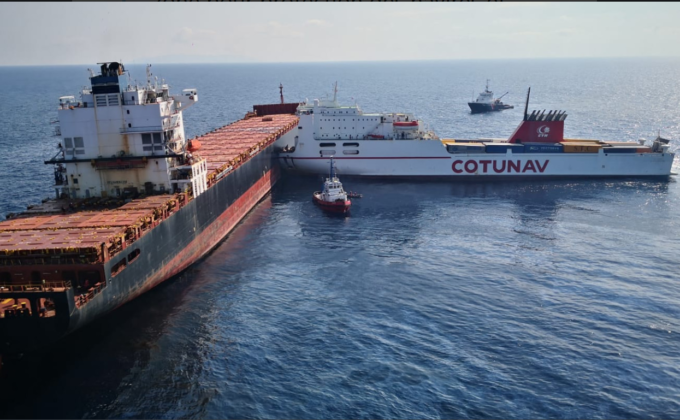 Pollution alarm at sea off Corsica (France) because of the collision between two ships occurred about 14 miles from Capo Corso. The collision occurred north of Cape Corso between the container ship Cls Virginia and the ferry Roro Ulysse of the Cotunav . From the information sent by the crews, the accident caused hundreds of cubic meters of fuel oil to spill out, producing a patch that extended to the sea for about twenty kilometers.
Immediate pollution alarm was triggered, with the French authorities coordinating the interventions and also involving Italy. In the mirror of the sea several units of the two countries have been brought, among which vessels specialized in the operations of containment of the polluting substances and in the reclamation of the waters. The goal is to recover the estimated output of 600 cubic meters of diesel.

Among the rescue vehicles that went to the site of the accident there are also three naval units of the Castalia company aimed at containing the spill: the Nos Taurus owned by NERI from Livorno, the Bonassola from Genoa and the Koral from Olbia.
The Maritime authority of Livorno has confirmed that the intervention concerns the spill of fuel and announced that in the collision zone were also directed three coast patrol boats of the coast guard, one of which from Livorno, Nave Ingianni CP 409, which it is based in the Tuscan port. The operations, as far as we know, concern the laying of containment booms to limit the displacement of hydrocarbons and the reclamation of water.