Wreck removal of the fishing vessel at Gorgona Island 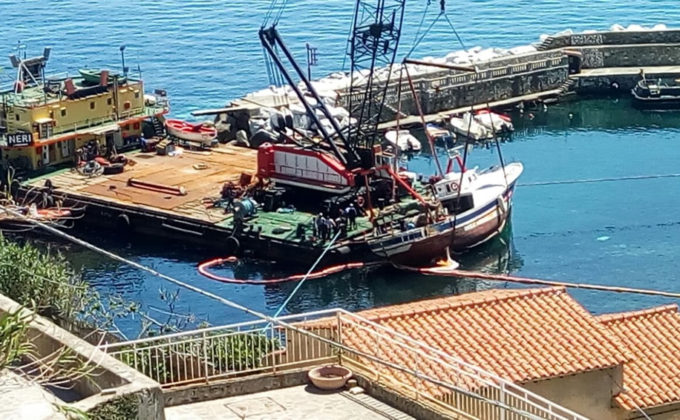 The potential threat to the marine environment, represented by 1,500 liters of diesel fuel in the bunker tanks, has been definitively overturned.
Thursday 11 May 2017 09:54

Around midnight on April 18, 2017, vessel was stranded on the low backdrops of the Gorgona harbour, where she had fled for not being wrecked at sea as a result of a water ingress opened in the machine room during a fishing trip. The Ardito II shipwreck, whose crew had been rescued by a Livorno’s Coast Guard motorboat, immediately waited for about three weeks to be recovered
In fact, it was necessary to have absolutely calm weather conditions to allow entry to the island with a pontoon with crane, on which to place the unmanned unit. Finally, on May 9th came to be a propitious day and the Livorno Coast Guard gave ok at the beginning of the operations carried out by Neri, commissioned by the shipowner under the coordination of the Maritime Authority.
A Coast Guard vehicle has been monitoring the safe conduct of activities, with particular reference to the profile of environmental surveillance, in an area of ​​great value, belonging to the National Park of the Tuscan Archipelago. The operations began with an underwater inspection at the early lights of dawn, in order to verify the seals offered by the hull of the unit.
At 16:15 Ardito II was refloated and then hoisted on the Meloria pontoon, for the towage to the port of Livorno, carried by the Pacini tug. The convoy came to mooring at 21:05. The potential threat to the marine environment, represented by the 1,500 liters of diesel fuel in the unit’s tanks, was definitively overwhelmed.