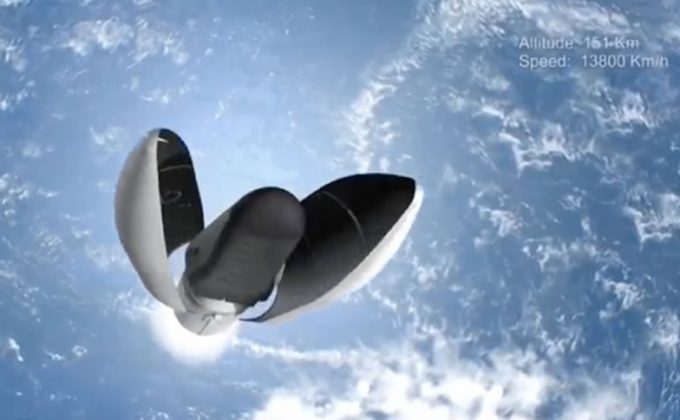 Turin (Italy) – There really is a lot of Italian in the program IXV European Space Agency ESA , which will bring in next October ‘s prototype space shuttle Intermediate eXperimental Vehicle ( IXV fact) to do a sub-orbital flight intended to test the materials and structures , designed to properly handle the controlled re-entry into the atmosphere of future reusable vehicles.

Not only is the Italian Space Agency has a key role in the program, but the national aerospace industry took part , with a coordinating role in the construction of the vehicle (assembled in the workshops of Thales – Alenia in Turin) , is responsibledevelopment and management of the ground segment ( mission control centers, ground stations , communications network with the center ALTEC also in Turin) , and – through an innovative cross-sector cooperation – will also manage the recovery at sea after his return to the atmosphere .
The maritime part has not only required a simple ‘ service ‘ , but the implementation of a real strategic integration , because the ship will operate the recovery will also be one of the elements of the control system on the ground of the mission, and not the least important.

This challenge was taken up by Fratelli Neri Livorno, along with Intermare of Genoa, which won the international tender on the basis of technical and economic convened by Thales in 2011 with a proposal that included the construction of a vessel specially designed for an investment of 15 million Euros.

Yuexin built in shipyards in China, th evessel NOS ARIES is these days performing sea trials . It is a ship equipped with DP -2 class system for the automatic maintenance of the position -controlled GPS , length of 60 meters , with double propeller for a total of 6000 HP , and equipped with a deck of 370 square meters of free surface . The ship will fly the Italian flag ( ulterior motive of prestige for the Italian Space Agency ) , and will have Italian crew .

Making use of extensive experience in both the recovery in difficult conditions at sea or even extreme , that of supply- vessels in offshore operations , NERI has been able to guarantee the provision of the vessels and the ability to manage their use even in the face the special needs of this unusual assignment.
While not exceptional nor size nor weight , the spacecraft , in fact presents risk elements specific (eg residues of fuel system thrusters ) and requires special precautions in handling for the purposes of the subsequent phases of technical verification post- flight, which will begin immediately after this will be hoisted on the deck and inserted into the hangar by technicians Thales – Alenia present on the ship.

The integration will involve fact even the crew with an official responsible for Thales / ESA that in an emergency you can deal directly with the Commander to define intervention strategies.

The ship will also be part of the system of ground stations that will follow the flight : the first two will be fixed and positioned in Libreville and Malindi (Kenia), using existing antennas for the intermediate phases of the flight, while a mobile antenna will be installed on the ship and follow the step return , or the heart of the program .

In this antenna is also entrusted with the task of receiving and downloading in a very short time – just after the release of the vehicle by the blackout of communication caused by the high temperature in the first stage of re-entry , and before falling to sea – data flight telemetry collected from more than 300 sensors installed on board , so as to minimize the risk of loss .

The entire program , and its forthcoming operating phase , was presented last week at the headquarters dell’ALTEC , with the participation of representatives of ESA, ASI , Thales – Alenia , the same ALTEC , and much providers that are owned by nine EU countries . Attention has been focused mainly on the spacecraft , a fascinating subject of five meters by two and a half from the form determined by the aerodynamic performance required to reduce friction with the atmosphere during re-entry , and filled with equipment that will implement the automatic pilot and to measure, record and transmit any telemetry value of the experimental flight.

The maritime mission will depart from Genoa in mid- summer , with a cargo of supplies and equipment that Europe will reach the launch pad at Kourou in French Guyana ( in the meantime, the vehicle will be led instead to the center ESTEC in the Netherlands for the latest verification of environmental compatibility ) .
From Kourou ship will move to Panama to be ready to reach the Pacific and the area for the landing in time according to the schedule of the launch in the second half of October. After recovery at sea , the ship will return the spacecraft to return to Genoa for the Thales – Alenia for further study.

Learn more about this recovery by clicking here.